I could easily kick this one off with some cheesy metaphor about rainbows leading to pots of gold, the last chance salon for glory in 2018 but in all honesty it’s just another race; and as the seasons roll on and Downhill matures further the prestige associated with the rainbow title for a DHer seems to change a little; not necessarily diminish but shift. The nationalistic flavour associated with racing for your country is something that has always made worlds unique but as the quest for race wins continues regardless of event or track and the battle among the world class for victory stays just as intense we see racers keep their formula as close to “regular” as possible. You may race for France, Germany or Canada but you’ll be pitting, staying, eating and sleeping with your trade-team just as you would at a World Cup. It’s much easier to adapt a well know system to new constraints than it is adapt to a whole new system. 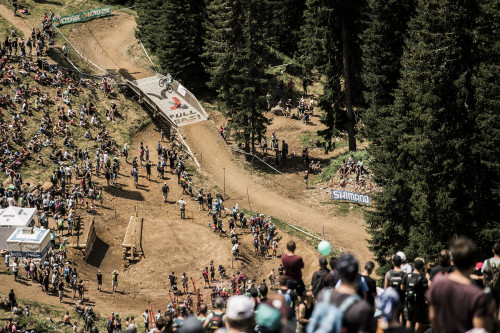 There are maybe three category of “potential” World Champions come Sunday. First those carrying momentum, Atherton, Seagrave, Pierron (Amaury), Bruni, MacDonald, Hart or Brosnan. 2nd we have the unwilling or very meticulously prepared specialists, those with early season injuries or issues that meant a shift in goals, approach and timescales favoured an all or nothing season ending rainbow hunt. A once favoured French approach from the likes of Barel and Vouilloz; this is far less common in the modern age. Although with his mid-season thumb issue and favourable track-record at Lenzerhide, Aaron Gwin could be the dark-horse. Category three is the unlikely victor, the opportunist who capitalizes on their own ability framed best by a total lack of expectation, pressure and focus from teams, media and fanboys. Going back to the year 2000 and Myles Rockwell pounced at the perfect moment in Sierra Nevada, Spain to make the most of favourable wind conditions and grab himself some rainbows. Miranda Miller was perfectly positioned last year in Cairns to capitalise on the mistakes and failures of the other ladies come finals and took home a deserved set of rainbows.

The rainbow jersey is a coveted piece of attire for racers, a nightmare for some sponsors but as we all know once the clock is on the world class racers will give us a world class show regardless of jersey fear!

With the DH World Cup driven in many departments by the needs and desires of Red Bull Media House we’ve seen some positive changes over the past 4 season, out went Tissot for timing and in came Belgian firm ChronoRace. This means 4 split times on course as well as near endless “micro-splits” that RB use on the live coverage for “key sections” and the virtual straight. Sadly for the past few years Worlds sees a return of Tissot for timing and a return to 2 splits on course, a less than ideal online live timing site and as we saw with Myriam Nicole’s issues at Cairns the potential for mistakes and issues in timing – not because of a lack of work ethic but merely I feel due to a crew of timing people doing a one of race and not having the momentum and system in place from 7 WC races.
The World Cup schedule is also pretty set, once summer comes and we have double header (XCO and DHI) races the schedule is very much solid. With World Champs things change and not for the better… for whatever reason Group B DH practice starts at 0730, 30 minutes earlier than a World Cup and with September sunrise in the alps at around 0650, well the first few minutes of practice are quite sombre. Little details like that can change things drastically for some racers, others not so much, it’s all about your support network. DH racing is always on Sunday’s at Worlds and not Saturday like a World Cup – that gives us a very short Saturday A.M. practice session that for some is nigh on worthless. Closer to the World Cup DH schedule of old, where we had 3 or even 4 days of practice!

For 2018 there is a raft of rule changes for world champs also; Riders must now qualify for finals; not seeding actual qualifying. With quotas closer to the World Cup of old; 80 men, 40 women, 60 junior men, 15 junior women etc… With 35 elite female starters that means they all qualify, there are 73 junior men, so 13 unlucky racers who won’t see Sunday. The top 20 men from the World Cup overall season ending rankings are protected. The top 10 women but no protection for juniors. So with less than stable autumn alpine weather forecast in Lenzerheide will this see a return to qualifying tactics of the 90’s for the non-protected? Well no, because even with qualifying and protected status from World Cup rankings, start order for finals and qualis is determined off of UCI DH ranking; not World Cup ranking. Like I said organisational oddities.
Here’s hoping for better timing and T.V. than Cairns! 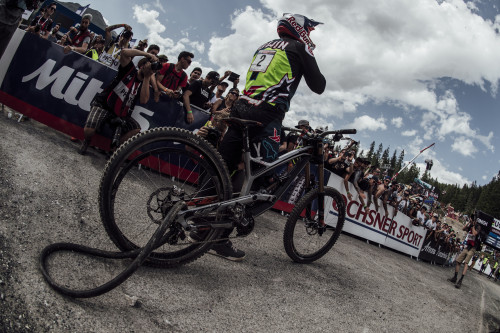 No title to defend, only a title to win…that’s always the most effective way to view racing. No matter what we will see new World Champions in the junior categories. Bruni will go for triple elite titles but his “on-form” country mates Vergier and Pierron are hungry as possible. Amaury has a seemingly viciously potent mix of youth, experience and support. Most certainly the favourite of the favourites. But a form sheet can’t only be based off of most recent results. Each track has its own unique flavour; camber, gradient, duration, soil types, rock types, pit set-up, accomodations and altitude. The complex addition of factors mean some riders preferred ways of applying and executing technique at race pace sees them rise to the top on a given track. Lenzerheide is no different; high speed, unforgiving and loose. The three previous trips we have taken here for WC’s have been in July, each time hot, sunny and extremely dusty and loose come finals. A September visit may be very different. To date Minnaar and Atherton have two wins a piece here. Nicole won last years race, alongside Minnaar in the mens with Gwin flatting while on course to victory. Aaron has been fast here but pipped by a few metres in 2016 by Danny Hart, off the boil in 2015 and ohh so close last year. Minnaar has a proven track record here, but like Aaron comes in under the radar and most certainly neither are on the form of last July, both rebuilding after mid-season arm/hand injuries.

While we have had a variety of podium finishers here Minnaar is the only male rider to have visited the podium each time the WC has stopped in Lenzerheide. Flashes of expected & unexpected brilliance from Thirion, Bruni, Greenland, Brosnan, Fearon and Lucas in editions past need to be noted also. All or nothing world champs runs are often special but bone dry midsummer conditions are not expected in 2018. 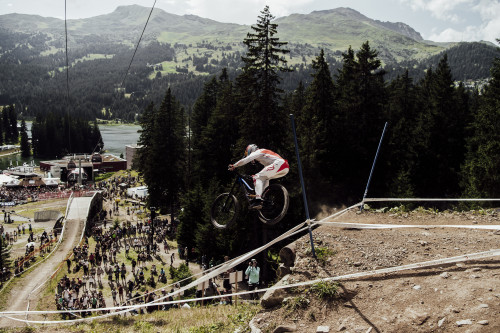 The potential for first times this year is massive, first time overall winner Pierron could polish off his season with rainbows meaning he will be the first rider ever to win his first world cup, the overall world cup and world champs in one season. Former Junior World Champs Walker and Illes could wrangler a podium. Gwin could find his first ever rainbows and Seagrave could join the small club of mainly French riders who have elite and junior titles.

The ladies form-sheet gives a Seagrave // Atherton showdown. A monumental battle for the ages. But as we saw in Cairns anything can happen. Atherton has the pressure to defend after a last round WC win and overall title. Seagrave has nothing but a race to win in front of her. Nicole, Siegenthaler and Hannah are all capable of medals and more if the circumstances are right. French world champs domination, maybe a thing of old, but with Cabirou and Ravenal in attendance a gallic jammed top 5 is possible!

The track and venue

There’s some fresh woods at the bottom of the hill but otherwise we are getting the same old “STRAIGHTline” race track. As DH demadns go it’s pretty straightforward. About three minutes in duration for the fastest men, add 25 to 30 seconds to that for the elite females. The track is fast but never overly steep or hugely rough. The bump frequency is one of the bigger demands. Altitude is on the higher side with the start line at 1905m and paddock at 1492m. Otherwise the stats are pretty vanilla – 2.3 km in length with a 413m vertical drop. Changeable weather could however make it a much rougher, wilder and slicker affair rendering certain forest sections “key” but also meaning certain high speed open sections are much less “skaty”.

The venue is nice, a high alpine farming area tuned ski crazy tourist trap. It has stunning views and good accomodation, with the chalets and apartments quite close to the track meaning a good “family” vibe all week – the sunny summer races of years past have meant good times at the lake just across from the finish line with BBQ’s and swimming for sore bodies. Single digit September temps will change some of that though. So prepping for any eventuality is needed.