It’s all about the junk in the trunk! Maybe a better way of looking at it is “their ain’t no position like the attack position”?

Posture is something your mother probably mentioned to you when you were (maybe you still are) a teenager. Well sadly for you it’s just as important on the bike as it is in daily life, in reality they are one and the same and that’s something I’ll talk about down below – awareness of daily postures.

So let’s get to business, the title says it all really, the posterior chain is something often refereed too, but seldom trained correctly and often neglected. What is it exactly? Well refer to exhibit 1 below. That’s right it’s the back side of your body from the erector-spinae right down to your Achilles tendon but  what we are going to focus in on a little more closely is the junk in your trunk…the gluteus maximus (there is a medius and minimus too), and the 3 muscles that make up the “hamstring” are our main hip extensors; i.e. they straighten your hip, think about going from seated to standing! 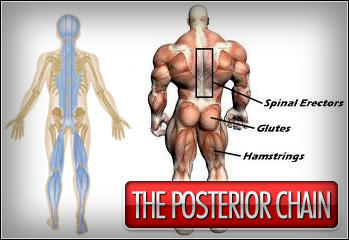 The real point of focus of this blog post though is the gluteus maximus ..why? Well simply put many downhillers and other gravity MTB riders I see are “quad-dominant”, they have over active hip-flexing muscles, poor overall hip mobility, weak abdominals and in some cases present with lower cross syndrome where the hip flexors are so tight they inhibit glute activation and subsequently the hamstring muscles and lower back have to take up the slack so to speak when extending the hip joint.

Why is that a problem I hear you ask, well long term it’s a recipe for disaster, from lower back pain to knee injuries and hamstring cramp and strains, having over active hip flexors and under used glutes leads to all those long term issues but in the more short term it basically means that you are not using your most power ful hip extensor! Which means 1) you won’t be pedaling anywhere near as powerfully or effectively as you could and 2) your posture, strength and overall technique on the bike in rough, steep or wild terrain will be severely hampered!

You see while the hamstring muscles (semitendinosus, semimembranosus and biceps femoris) all act to extended the hip they do so in a position specific manner. Depending on how flexed/bent your knee is the hamstring muscles have different roles and act in conjunction with our main hip extended the GLUTEUS maximus! The hamstrings hang off the pelvis and run to below the knee, as such they have a large role to play in knee flexion. The glutes however and specifically Glute Max are a one joint muscle, they hang of the top of your pelvis, lumbar spine and sacrum and attach at the femur. They are the King daddy of hip extension, power production and control! Once you master their correct function you’ll have nothing but fun and explosive playfulness on the bike! Don’t get me wrong the hamstrings have a pivotal role to play in keeping you “in posture” on the bike, especially when things get steep or sideways, but the glutes drive you back to “center” so to speak,

The glutes are such a key muscle in mountain bikers posture and “attack position” for a few reasons.  You’ll often see the most elite mountain bikers in a very relaxed and tall positon on the bike, even when things are getting wild..why? Tall means limited knee flexion, which in turn means limited activation of your quad muscles and hip flexors and thus less energy expended. The muscles that maintain this mix of dynamic and isometric contraction to keep you “tall” are the glutes and to a lesser extent the hamstrings and in gros the posterior chain!

Your torso should remain neutral and strong while your hips travel through a pretty limited range of motion of flexion and extension to maintain control and execute techniques over the wildest of terrain. So yet again we can see the importance of glute strength and control! The glutes are also the primary muscle that resists flexion of the knee and hip, so think about 20m of successive Les Gets size braking bumps or a WC DH course like Mont Sainte Anne, what’s going to help you maintain posture, vision, control and speed? That’s right GLUTEUS MAXIMUS!

But we ain’t finished their, Gluteus Maximus also has key role to play in stabilising the hip joint. So for example, like discussed above, if you have “lower crossed” syndrome or some similar issues you’ll often find that you have pain in the front of the groin. Making it feel tight and sore, normally most people will go to stretch their hip flexors when it reality it’s poor glute strength and control that is leading to your femoral head sliding forward in the hip socket and causing issues. Strong glutes actively “pull” the head of the femur back and stop this issue. Likewise strong glute max means you’ll feel stable and “solid” on the bike in critical “gnarly” situations. Your centre of gravity is more likely to be maintained if you have strong glutes.

Similarly if you want to bunny-hop or “explode” or pop off of a small jump, drop or roller you’ll need to actively extend the hip and drive your centre of mass forward. This is achieved by having powerful glute max.

Gravity’s effect on the hip joint is also quite profound, especially when we actively multiple gravity by hammering down a mountain side and hitting turns, drops and rock gardens. Simply maintaining an erect posture or re-finding the “attack position” regardless of how “tall” or extended yours is requires glute control and strength. If finding yourself lower and lower and further and further back as you descend or ride sounds like you, ending up with a low torso, flexed knees and hips over the rear axle all the time is “your thing” then it is pretty likely that you have some glute control/strength issues and likely are presenting with some of the issues of “lower crossed” syndrome.

Luckily for you guys though, I’m here to help. I’m going to walk you through a few simple steps and exercises you can incorporate into your strength training or general exercise routines to help establish glute strength and control as well as lumbo-pelvic control, abdominal strength and hip-hinge mastery! All of which are the key ingredients of what we want to start cooking up on the bike.

In clearer terms what we want is a Stable Core – Mobile Hips but Strong and balanced everything!

First stop is to learn to stabilise the core, use your breathing muscles correctly and work on rotating your pelvis posteriorly! Sounds complicated but it’s not. Use well know anti extension core moves like planks (focusing on squeezing your glutes) as well as using active stabilising moves like the half kneeling shoulder press with a glute activation.

The best place to start with stabilising though for most people is the “DeadBug”. This move although simple looking requires supreme core control as you bring upper and lower limbs through full range of motion. It’s the perfect place to start to get your lower back to relax, pelvis to rotate back and genrally deal with dysfunction before we go on to load up or deal directly with strengthening the glutes and mobilising the hips!

Moblity for the hips, glutes and posterior chain is built on a foundation of control…plain and simple. There is no need to mobilise if you can’t control movement.

There are an endless list of drills to do for hip mobility as well as specific glute and posterior chain stretches that may be needed for certain people. One of my favourite “combo” moves though works to stabilise and strengthen the glutes uni-laterally while mobilising the hips in a way that is very useful to mountain bikers (external rotation, think inside leg when cornering hard). This move is called the “Sweeper”. I’ll let the video do the explaining.

Next up in the mobilisng list is the hip hinge…this is crucial, absolutely crucial if you want to learn to use your glutes to their natural potential and certainly if you wish to go on to actively training the posterior chain for strength! Watch the video below to see more and the keen eye will see the similarities between the hip hinge and the normal “attack-position” you should have on your bike.

Learning to hinge your hips means moving your hips through a wide range of motion while the knees stay static or work through a very small ROM. Similar to what we want on the bike (although we are in a slight split-stance on the MTB)!

One of my favourite combo moves though that covers posterior chain control and overall strength is this:

The list here is deep! Real deep. The amount of quality exercises that exist to work the posterior chain and glutes is very wide ranging. The best way to approach it though is to start basic and work your way up to mre complete or complex movements before you even worry about load. Once you’ve mastered the skill aspect of strength and gained the benefits there in terms of your glute strength then you can think about going back and loading up the more basic or complex moves with external weight!

The progression for Point1 athletes often goes something like this…

Now while that is the usual progression that doesn’t mean we don’t frequently regress the moves or mix and match as we need. Especially when hips become “tight” with long travel sessions in-season.

Once strength has been established in the posterior chain then we work towards making those moves more “powerful”, partial Olympic lifts, swings, explosive DL’s or fast RDl’s, not to mention depth jumps etc…

Here’s some videos to give you ideas of moves to use to STRENGTHEN the posterior chain and glutes.

Obviously we don’t just want to work or develop the posterior chain and forget about the other muscles in the lower or total body. But the reality is that the “front-side” of the body because we can see it in the mirror gets far more attention than the rear. Thus leading to the problems described above. Hopefully you are engaged in a balanced strength and conditioning program that will allow the body to work as it should synergistic-ally!

The last piece of the puzzle for many is transferring over all the gym and mobility work to the bike. Well the easiest way to deal with integrating your hip hinging and posterior chain strength on the bike is to be mindful! Much of the benefits will transfer on their own via better posture and mechanics, but a little bit of mindfulness goes along way.

Aim to ride technically challenging or rough sections relaxed and tall, pop off anything you can see and be passively reactive! Now Passively re-active sounds like an oxymoron but what it means is you want to stay relaxed on the bike let gravity flow you over the terrain but at all times be looking for the split second spot on the trail where you want to actively push the bike down, extend your legs or pop off a lip. Use your new found hip strength and control to make speed, deal with gravity and cover ground faster and more comfortably!

By all means actively working the hip extensors on the bike with bunny-hops and explosive cornering is a great option also!

Finally here are some videos for all you visual learners:

Check out Point1 Trained, FMD superstar Neil Stewart from the 59 sec mark here to see how explosive he is through a very short range of hip motion but likewise how strong and stable his torso/hip angle stays when riding.